Are you thinking of having a hair transplant? If you're still deciding whether this kind of treatment is an option for you, you might want to consider others that have had a transplant. While it’s still a hot topic for debate, international movie star and celebrity A-lister Jude Law has undergone some sort of hair loss treatment. In this article we explore the possible treatments Jude Law may have experienced over the years.

Who is Jude Law?

Jude Law is a British actor, famous for his silky narrator voice and depiction of popular characters in Hollywood hit films; not to mention his good looks!

You might have seen him in Fantastic Beasts and Where to Find Them "Crimes of Grindelwald", where he portrayed a young Albus Dumbledore. He has also played starring roles in such films as the iconic Christmas film "The Holiday", as well as other blockbusters including Sherlock Holmes, and Captain Marvel. 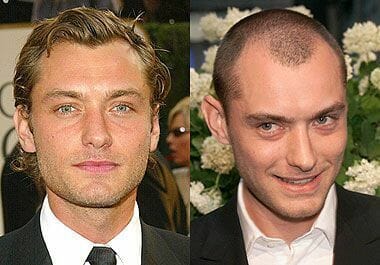 Why did Jude Law need a hair transplant?

You might be wondering why a good looking chap like Jude Law needed a hair transplant. Well, hair loss certainly doesn't discriminate, it is a biological lottery that can affect anyone.

Jude Law had previously been known for his ever-changing hairline, and it has been widely publicised for years that he has had some sort of hair transplant surgery, although the actor has never confirmed that this is the case.

A large proportion of men suffer from receding hairlines at some point in their lives, including Jude Law. At around 26 years old, it appears that he had very visible male pattern baldness, which looks as if it progressively increased when the actor entered his 40’s.

During this time, photos suggest that his hairline transformed from a V shape to a U shape, a big indication of hair loss and opening up an individual to the potential of having a hair transplant. Fast forward to 2015 and Jude’s hair has a lot more volume to it.

Has Jude Law had a hair transplant?

Some people argue that he has never had a hair transplant, but instead adopted a removable hair system. This could explain his changing hairline - but a hair transplant would definitely look similar and have more permanent results!

While hair transplants are much more permanent, they do need maintenance every so often and Jude Law's changing hairline could indicate that he isn't getting this done as often as he should!

Jude Law's hair transplant: before and after

Looking at a few before and after pictures of Jude Law’s when he was a bit younger versus today, it raises suspicions that he very well might have had a hair transplant. In the late 1990s, Jude Law's hairline was already receding, and even more so in the 2000s.

From 2015, his hair has once again been full of volume, framing his face and making him look young.

How we can help you

If you’re interested in finding out more about hair transplants and how the Treatment Rooms London might be able to help you, why not speak to one of our experienced hair transplant surgeons for more information.

We offer a full consultation where we explain the process and evaluate your current situation with the view of providing a tailored treatment plan. For more information about the hair transplant process, please visit our patient’s journey page, or if you’re figuring out the costs involved, our hair transplant cost page will be able to answer any questions that you might have about how we charge for an FUE hair transplant.

At treatment rooms we specialise in FUE hair transplants, feel free to get in touch to find out more, or browse our other articles for answers to common questions: